Earlier today, I received word that long-time Shenandoah Valley political activist Suzanne Curran has died.  A resident of Shenandoah County, Ms. Curran was the program director for the Shenandoah Valley Constitutional Conservatives, which holds a monthly gathering at the Denny’s in Mt. Jackson.  She was also heavily involved with the Republican Party of Virginia, serving as the Western Vice Chairwoman.

Although Ms. Curran and I disagreed over candidates, for example she supported Ed Gillespie for U.S. Senate in 2014 while I preferred Shak Hill over Gillespie for the Republican nomination and Libertarian Robert Sarvis over Gillespie for the general election, and she was an ardent supporter of Ted Cruz for president while I was not, I admired her for steadfastly standing up for her principles and her willingness to stand behind them even if doing so upset Republican Party bosses and elected officials.  She was a courageous woman and I appreciate that she treated me with respect and dignity in a time when many in the GOP shunned me. 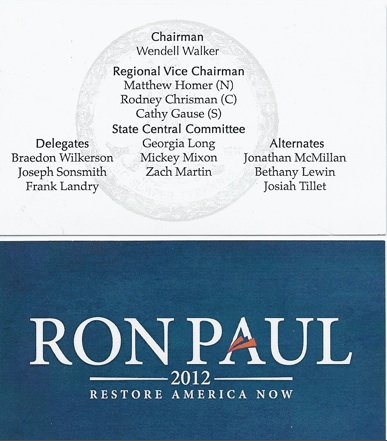 I’d like to share two memories of Suzanne Curran.  The first is from the 2012 6th district Republican convention.  Ms. Curran was seeking a spot as a delegate to the RNC National Convention that year.  Although she was a supporter of Newt Gingrich (while I was for Ron Paul), I thought that she easily gave the best speech of any of the candidates, speaking of the importance of principles and working together to achieve common goals.

The Ron Paul campaign had their own preferred slate of candidates (as pictured), but as I thought Ms. Curran was more honorable than one of the “chosen ones”, I cast one of my votes for her instead.  I was disappointed when she didn’t win.

The second recollection is more recent.  Several months ago, I wrote what I thought was a quite controversial piece about the race for Republican National Committeewoman.  Shortly thereafter, I attended a political dinner and Suzanne Curran was there too.  She came up to me and said she had to shake my hand, which she did, and then thanked me for writing the article.

Life is an odd thing really.  Only a handful of days ago, on June 3rd, I had lunch with Suzanne Curran in Harrisonburg at First Friday.  During that time she displayed her usual spirit and vigor.  Just two weeks prior the 6th district Republicans elected her to serve as a delegate to the Republican National Convention and I’m sure she was excited to attend, especially after she fell short in 2012.  Now, her space will be filled by another.  Who knew that she would be gone so soon?

Suzanne Curran was a woman who would not allow anyone to bully or intimidate her and, from time to time, she would encourage me to stand tall too.  It is my great hope that Suzanne Curran’s life will serve as an inspiration, especially to young women who share her passion for politics.

Suzanne Curran was a good woman; I miss her already.

One Reply to “In Memory of Suzanne Curran”